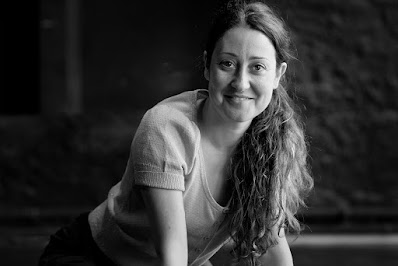 Dancer improviser, Meditation guide and Dharma Art authorized teacher, from Barcelona. Creator of Contemplative Movement®.
As a dancer she has been trained in contemporary dance in Barcelona and specialized in improvisation in Israel (AECID Grant, 2008). Since then she is deeply committed in this discipline as the basis of her body and movement work. She continues expanding her studies with international masters such as Lisa Nelson, Steve Paxton, Julyen Hamilton, Mal Pelo Company. She is also influenced by Body Weather training with Andrés Corchero and Frank van de Ven.
She performs her own creations, directs and collaborates with artists from different disciplines since 2005. She created the solos A Glops (2010), Fragments de cos (2012), The Unfinished Solo (2016) and Fulles (2020). She directed the duo Taking a walk (2014) with Guy Leon and group pieces with Los3nombresdeungato Company: Los 3 (2012), Fuera de lugar (2013), Du bist dran (2014). She is interested in collaboration as a practice of working together, from which she created many platforms (CUE Barcelona, improLab, Festival CIM) and collectives (43:43, Alaka).

She is a meditation practitioner since 2010 and a vajrayana student of the Shambhala community, a tradition of Tibetan Buddhism. She has been trained and authorized as a Meditation Guide (Madrid, Spain 2015) and Dharma Art teacher (Los Angeles, California 2018-2020). Currently she is also a Shambhala Art Assistant Director for Europe. This view has influenced her dance improvisation practice, since then incorporating a contemplative approach into her offering of Contemplative Movement® to this sacred world.

She teaches nationally and internationally for more than 15 years. The essence of her teaching is creativity as an inherent capacity to all human beings, and she is convinced that connecting to the wisdom of the body benefits society, now more than ever. She has been professor at the University of Barcelona (UB) and the Metropolitan Program of Education for Sustainable Development (AMB).

"Her need for movement lets her do away with pre-established forms, reject closed choreographies and explore improvisation from the innermost core of her senses, meditating." REVIEW 'A meditation in movement' by Barbara Raubert, TimeOut Barcelona

2010-now. Meditation Training in the Shambhala tradition of Tibetan Buddhism and vajrayana student from Sakyong Mipham Rinpoche. She has been trained and authorized as a Meditation Guide (2015) and Shambhala Art Teacher (2018). Since 2010 she incorporates a contemplative approach into her practice of dance improvisation, and influenced by the work of senior teachers of this lineage such as Barbara Dilley (Contemplative Dance Practice) and Arawana Hayashi (Social Presencing Theatre), she develops her offering of Contemplative Movement®.


PROFESSIONAL EXPERIENCE AS A DANCER:

PROFESSIONAL EXPERIENCE AS A TEACHER:

2008-2010. CUE Barcelona: An international artistic project that creates space for interdisciplinary improvisation. During these years with this project she kept exploring the art of improvisation along with various interdisciplinary artists in different city spaces, as well as making several interventions in public spaces: urban and rural.
2009-2012. BodyWalks: A research, creation and theoretic project around the body in the territory; within the context of the first year of the MA "Contemporary Arts Practice & Dissemination" that she studied in L'animal a l'esquena/University of Girona. Until 2012 she developed it together with the dancer Guy Leon, with which she realized artistic residencies, site-specific performances and walks in very different artistic contexts.
2011-2018. improLab: A platform from which she articulates different projects and activities promoting the practice, research, creation and reflection of dance improvisation in Barcelona.